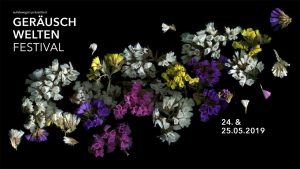 The Geräuschwelten Festival throws a spotlight on an international scene that moves somewhere between musique concrete and industrial music and has produced its own sound aesthetics. Whether performative-theatrical, industrial-brachial, interwoven to pulsating rhythms, or generated as an analog synth crackle – everything revolves around sound manipulation and the beauty of
everyday sounds.
The festival is organized by the Cologne label aufabwegen and produced in cooperation with cuba cultur Münster and Kulturradio WDR3.

Étant Donnés has participated in prestigious festival and exhibitions such as Documenta in Kassel, The Kitchen in New York, Eurokaz in Zagreb, Sonar in Barcelona, ​​Centre Pompidou, Foundation Cartier, Etrange Festival in Paris, Berlin Atonal, etc … In 2012 they finished the film “Jajouka, something good comes to you” shot in the village of Jajouka in Morroco and that was acquired for the collection of the MoMA in New York. Between 2015 and 2019 the albums Aurore, Royaume, Re-Up, Offenbarung und Untergang and La vue were re-issue and Le soleil, la mer, le cœur et les étoiles, Le paradis blanc and the 3 vinyls box Unreleased tapes 1977-1979 were released. In 2017 they made their great successfull stage return playing their new show “Flesh back” at Click Festival in Elsinore-Denmark and Tower Transmissions Festival in Dresden, Germany.

FLESH BACK
Two men – two brothers – standing on each side of an empty stage before a fireball. The sun, like a black hole, vacuums the air from the room. Protesting words … screams. A heartbreaking poem that stands up and turns to face the sky. A sound like a cosmic vibration and electrical flashes of lightning lacerate the eyes and ears … and yet from the heart of this ultimate violence, a magnetic hand moves forward to carry us… to raise us. There are no more contradictions. That which is opposed, agrees – like the bow and the lyre. Heraclitus, Nietszche, Antonin Artaud-these insane poets who demanded everything from love, life and death… FLESH BACK. A return towards the flesh, towards the deaf memory of the flesh – a spectacle that leaves us lost…regenerated. Covered in a new body, in love. (Photo: Joseph Caprio)
www.etant-donnes.com

I dedicated my sound artist work, to curves, volutes, roundnesses, undulations, rolling-ups, rotations, as for example in “Zophrétastha“, performance for wheelchair.
“Psaoarhtelle“ is a new variation for roundings, intimist, strange and familiar at the same time I explore the circular friction of the ambient air, the curves there bruissantes of auspicious signs, the soundroundnesses of projected shadows through their materials, and many other progresses.
Anne Gillis, also known as Manon Anne Gillis, is a visual artist, composer and performer. She first started under the name Devil’s Picnic – more synth based and less concrète than followed works. Her music consists of usually short tracks build from looped sound samples originated mostly from found objects and, prominently, her own voice purring, hushing, and growling. There is an animal and primitive quality to her sound palette, her concrete music being made of closely miked bodily sound samples, but also because of the elementary means of composing she uses: only brief instruments, simple loops of admittedly elaborated sounds.
(Photo: Anne Gillis) 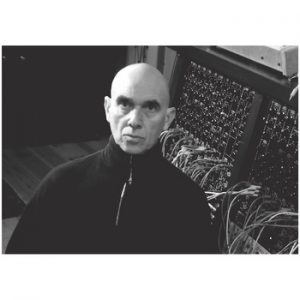 Born in Pontypridd, South Wales into an exceptionally musical family, Thighpaulsandra developed an early interest in modern classical and electronic music. Whilst still in school he formed an avant-garde rock group incorporating influences from his admiration for Cage and Stockhausen.
Julian Cope, who after discovering Thighpaulsandra’s shared appreciation of Krautrock and electronics invited him to become the keyboard player in his group. They recorded many albums together between 1994 and 2002 including ‘Autogeddon’ and ‘Interpreter’. During Thighpaulsandra’s tenure with Cope he garnered the attention of John Balance from Coil who, after an introduction via Thighpaulsandra’s management, became a great friend. Thighpaulsandra was eventually asked to join Coil leading to a creative renaissance in the group’s career, he was elemental in convincing the notoriously hermetic Coil to perform live. He contributed to all major Coil albums from 1999’s ‘Astral Disaster’ to ‘Colour Sound Oblivion’ in 2010, a retrospective live DVD set, released after Balance’s untimely death in 2004. His influence is especially poignant on fan-favourites „Musick to play in the Dark Vol 1 and 2“. From 1997 to 2008 Thighpaulsandra also performed as keyboard player in Spiritualized. In recent years Thighpaulsandra worked with artists like Cyclobe former Cocteau Twin Elizabeth Fraser or Wire performing in the UK and Europe.
Thighpaulsandra started to release his own music in 2000. The initial ‘Some Head Ep’ to which Balance contributed vocals was followed with series of albums. Inspired by the stripped-down solo shows Thighpaulsandra had been been performing since 2015 his new album ‘Practical Electronics with Thighpaulsandra’ was released by Editions Mego in March 2019.
(Photo: Thighpaulsandra) 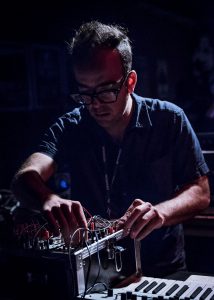 Anthony Pateras is an Australian composer/performer whose current work focuses on electro-acoustic orchestration, temporal hallucination and sound phenomena. Pateras has created over 75 works, receiving performances from the Los Angeles Philharmonic, Australian Chamber Orchestra and BBC Symphony, commissions from the GRM, Slagwerk Den Haag and Südwestrundfunk Baden-Baden, residencies from ZKM, Akademie Schloss Solitude and numerous fellowships. He has released over 40 albums including collaborations with Mike Patton, Chris Abrahams and Valerio Tricoli, guested on records by Oren Ambarchi, Sunn O))) and Fennesz, as well as working in film with director Pia Borg, producer François Tetaz and literary critic Sylvère Lotringer. Aside from solo concerts, Pateras currently performs with eRikm, Jérôme Noetinger and North of North.
THIS AIN’T MY FIRST RODEO is a project that explores the psycho-acoustic interactions between two synthesizers in quadraphonic settings. Ornamenting the synthesizer fabric are materials generated and mutated by 1/4 inch tape delay. These elements fuse to heighten the production of sound phenomena and third-ear emissions. Pateras thus creates sound textures with infinite folds allowing an immersive listening, applying his knowledge in the field of electroacoustic and spectral music, his research on physical and acoustic phenomena and the exploration of sound and its mutation — XING

„THIS AIN“T MY FIRST RODEO was commissioned by the APRA AMCOS Art Music Fund in partnership with the Australian Music Centre“.
(Photo: Afarina) 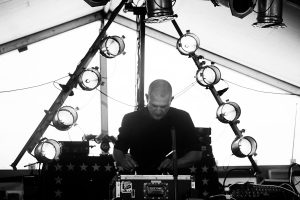